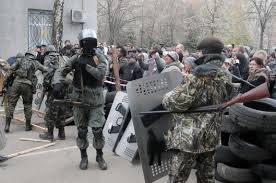 A group of pro-Russian men armed with automatic weapons have taken control of the police headquarters in the Ukrainian city of Kramatorsk, 150 km from the Russian border, local officials and witnesses said.

An organised military unit of over 20 men wearing matching military fatigues and carrying automatic weapon took over the building around 1700 GMT after arriving on at least two buses.

Video footage showed the men taking orders from a commander and shooting from automatic rifles as they approached the building.

Ealier a gunbattle erupted after security forces engaged the men who attacked the station, the interior minister said.

“Unknown men opened fire at the district police station. The police are firing back. They have been exchanging fire,” Arsen Avakov said late on Saturday on his Facebook page.

The seizure came hours after armed pro-Russian separatists raised the Russian flag in the troubled eastern city of Slovyansk, deepening a stand-off with Moscow which, Kiev warned, was dragging Europe closer to a “gas war” that could disrupt supplies across the continent.

At least 20 men armed with pistols and rifles took over the police and security services headquarters in Slovyansk, about 150km from the border with Russia.

Officials said the men had seized hundreds of pistols from arsenals in the buildings. The gunmen replaced the Ukrainian flag on one of the buildings with the red, white and blue Russian flag.

Speaking shortly after the separatists seized the police station, Avakov said Ukrainian special forces had been dispatched to the scene.

“Our response will be very severe,” Avakov wrote on his Facebook page. “There is zero tolerance for armed terrorists,” he added.

Shortly after, the Ukrainian interior ministry also said the separatists had taken another security building in the restive city.