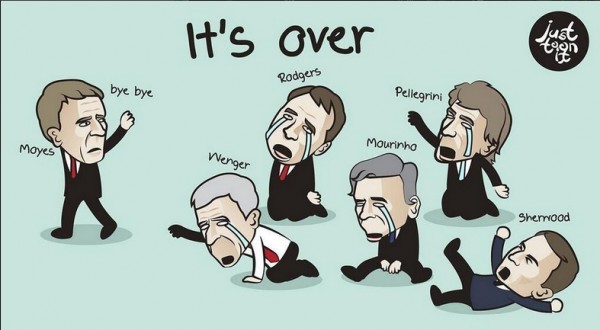 The 1999 Adamawa State Governor Elect shared his thoughts on his Facebook page:

“Some of my children are Man United fans. Today, some are happy, some sad. I don’t know if I should be ‪#‎MoyesOut‬ or ‪#‎MoyesIn‬ So I’ll say sorry to the sad ones, and congratulations to the happy ones.”

Well, David Moyes will be remembered as a unique coach in any case.

SEE 14 anti-achievements of the manager:

1. United are guaranteed to finish the season with their lowest ever Premier League points tally

2. United fail to qualify for the Champions League for the first time since 1995

3. United’s worst home league form for over a decade

4. Suffered three defeats in a row for the first time since 2001 this season

5. Eliminated in the FA Cup third round – something which happened just once under Ferguson

6. First ever home defeat to Swansea this term

7. First home defeat to Newcastle since 1972

14. First time Everton & Liverpool have ever done a league double over United in the same season.

Do you believe we’ll see a renewed Manchester United next season?