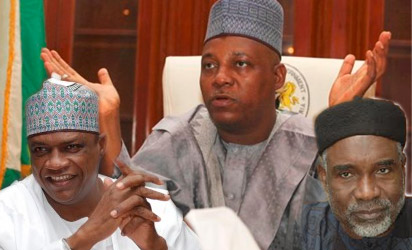 Former Federal Commissioner for Information and Ijaw national leader, Chief Edwin Clark, yesterday, called for the suspension of all democratic institutions in Adamawa, Borno and Yobe states to allow the military take full control until peace and order is restored in the affected states.

Speaking to newsmen in his Asokoro residence, Abuja, on Thursday, Clark, who is a delegate at the ongoing national conference, specifically charged his kinsman, President Goodluck Jonathan, in accordance with his constitutional powers, to declare a full scale state of emergency in the three North-East states similar to what happened in Plateau and Ekiti states during the Olusegun Obasanjo administration.

The elder statesman added that the abduction of 270 female students would not have been possible “under a protective military regime in these states”.

Clark said: “This in effect means that all democratic institutions should be suspended to permit the military exercise full control until peace and order returns.

“Securing and safeguarding the lives of the citizens of Nigeria is a more sacred duty than political considerations.

“There is nothing like partial declaration of a state of emergency in the 1999 Constitution; what Section 305(c) of the 1999 Constitution contemplates is the recourse to ‘extraordinary measures to restore peace and security’ where there is ‘breakdown of public order and public safety’.

“The current situation in Adamawa, Borno and Yobe states no doubt epitomises complete breakdown of law and order, with dangerous incursions to the Federal Capital Territory.

“What happened in Plateau and Ekiti states where full declaration of state of emergency, that saw Gen. Olurin and Gen. Ali taking over the reins of state administration, were not of greater dimension and scale than the hundreds of innocent lives and property lost to the activities of insurgents in these frontline states.

“These conditions are still prevalent in the frontline states of Adamawa, Borno and Yobe in greater scale and ferocity. This makes it extremely mandatory for the President to address this scourge decisively.

“The time to act is now Mr. President. Declare an extension of the state of emergency in the frontline states on full scale in exercise of your constitutional powers”.

He also took a swipe at Adamawa State Governor, Murtala Nyako, over the memo he wrote to his fellow northern states’ governors, saying the letter was nothing short of treasonable felony for inciting northerners against the Jonathan-led Federal Government.

According to the prominent South-South politician, statements by a democratically-elected governor and a retired military officer accusing the Federal Government of committing genocide against northerners under the guise of fighting terrorists was not only callous, bizarre, insensitive, impenitent, unimpressionable, but very irresponsible.