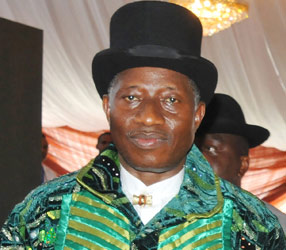 President Goodluck Jonathan on Sunday reiterated that Nigeria would overcome its current tribulations and that no criminal group, including Boko Haram, could make it to disintegrate.

The President stated this when FCT Minister, Sen. Bala Mohammed and Sen. Philip Aduda (PDP-FCT), led some residents to pay him Easter homage at the Presidential Villa.

The President said the hope brought by the resurrection of Jesus Christ gives him assurance that insurgency in the country was ephemeral.

“To me, Easter is the most important in Christian faith because our hope would have been in vain without the resurrection of Christ.

“The resurrection of Christ gives us hope. Just like Christ told the people when he was alive that his disciple will face tribulations.

“As a nation, we are facing tribulation but surely we have hope. Surely, we will overcome the tribulations.

“Even those who think that this country will be divided into North, South, East and West, will not see it come to pass.

“The Boko Haram will not make Nigeria to disintegrate’’, he stressed.

On the bomb blast at Nyanyan, he said, “when it happened, people from all religions and classes participated in the evacuation of those injured even before the security people arrived.

“Those who donated blood were ordinary people from everywhere, irrespective of their religious beliefs or tribe.

“That showed that there is no criminal group funded within or outside this country that can lead to disintegration of this country.

“No criminal group will make this country to disintegrate. Boko Haram will come and go.’’

The President said his administration would continue to work very hard to strengthen the security agencies.

He urged states and local governments to complement the efforts of the federal government by initiating development and employment generation programmes.

He thanked Nigerians for their prayers for the nation.

On his part, Mohammed thanked Jonathan for the positive initiatives in transforming the country.

He said the FCT community would continue to cooperate with the government.

The Chairman, Senate Committee on FCT, Sen. Smart Adeyemi said “Nigeria is a nation of God and its leaders and followers must put their trust in God to overcome every tribulation.’’

Earlier, the President, his mother, Ayi and top government officials, prayed for peace, tranquility and security of the nation at the Easter Sunday service in Aso Rock chapel.

The prayer was led by the Chaplain of the chapel, Ven. Obioma Onwuzurumba and other clerics.

The congregation prayed that “the resurrection of Jesus Christ will roll away the stone of insurgency, insecurity and bloodletting in the country.’’

The News Agency of Nigeria (NAN) reports that the Chief Imam of Abuja, Ustaz Musa Mohammed and some Moslem leaders in the FCT, were in the delegation.

Primate of the Anglican Church, Arch. Bishop Nicholas Okoh was also in the delegation.

Others were the Secretary to the Government of the Federation, Sen Anyim Pius Anyim, ministers, Managing Director of NAN, Mr Ima Niboro and other presidential aides, [NAN]