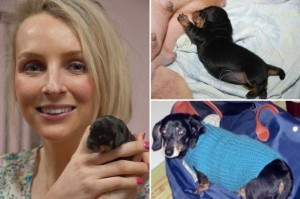 Dog charities and welfare organisations have lined up to criticise the decision to clone the first British dog.

The Mirror’s story of Britain’s first cloned dog sparked fierce debate with pet owners on TV and radio questioning if it is right to replicate your beloved pet.

Despite protests, South Korean firm Sooam Biotech has already received more interest from Britain, although the £60,000 price tag will make it tough for everyone .

But the Kennel Club, the largest organisation devoted to dog health and welfare, is strongly against the principle of cloning saying it jeopardises dog welfare and runs contrary to the Kennel Club’s objective to promote in every way the general improvement of dogs.

Caroline Kisko, Kennel Club Secretary, said: “People may turn to cloning when faced with the loss of a beloved pet and the need to replicate the emotional bond they have with their dog but unfortunately this comes at a price and the price is the welfare implications involved in cloning.

“At the present time cloning involves invasive procedures, which include surgically implanting the embryo into the bitch used to carry the clone.  Because of the poor success rates this procedure may be repeated multiple times, in many different bitches, in order to produce a successful outcome.

“We are genuinely shocked at the concept of the competition and the trivialisation of this issue, as we believe most caring dog owners will be.

“The idea that the emotional bond with a dog that has passed away is being put above the welfare of the dog or dogs involved in producing the cloned pet is appalling.  The ethics involved in this are undoubtedly questionable and we would urge people to take a stand against the practice.”

Elaine Pendlebury, senior veterinary surgeon for the PDSA charity, also said in a statement that they believed cloning was “not an appropriate way” to deal with the loss of a pet.

“We understand that losing a beloved pet is extremely upsetting, and it is important for owners to come to terms with their bereavement over time. Pets are a huge part of family life, providing love and companionship, and the void that can be left can be hard to come to terms with,” she said.

“At PDSA we provide support and advice to owners to help them deal with their feelings and come to terms with their loss. We believe that cloning is not an appropriate way to deal with the loss of a pet.

“It is important to remember that manipulating identical DNA does not lead to an identical pet. A cloned pet may look the same but their personality will be different because personality develops through life experiences, including training and socialisation.”

Rebecca Smith, the 29-year-old caterer from London who cloned her 12-year-old dog Winnie as part of a competition in conjunction with a Channel 4 documentary, is adamant it was the right decision.

She said: “I think the main fear is it will go toward human cloning but that is not something I am interested in.

“It might not be for everyone but for the people who like it, let them enjoy it.

And for those that don’t, why kick off about something that won’t effect you?

“I am just so excited about Winnie meeting her, that is going to be the next big step.”

Sooam Biotech say in their sales page online that as well as dog cloning they “heal broken hearts” with their cloning. It is even possible to clone a dead dog if cells are taken within five days of death.

The doctor behind the cloning firm, Dr Hwang Woo-suk, has an unblemished record on dog cloning and his results have been independently verified.

But it emerged yesterday that he is also a disgraced stem cell researcher who falsely claimed in 2004 to have produced the first cloned human embryo.

It was discovered that results in two high-profile papers published by Dr Hwang in the Science journal had been fabricated, including the study in which he claimed to have created the first ever cloned human embryo.

Dr Hwang apologised but claimed that junior researchers in his team were to blame. He was forced to resign his post at Seoul University and was later convicted of fraud over private and public funding he had received for his work.

Despite his fall from grace, the authenticity of Dr Hwang’s work on dog cloning is not disputed and his team claims to have created hundreds of cloned pets including dozens in the US.