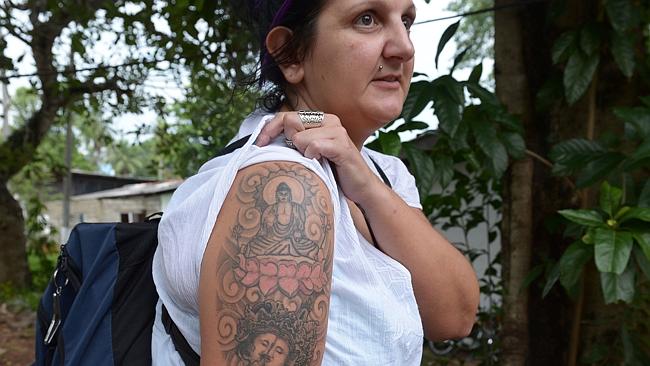 A British nurse jailed in Sri Lanka for sporting a Buddha tattoo has left the country after suffering what she says was sexual and other harassment by prison officers.

Naomi Coleman said she was exhausted but relieved to be heading home after she was arrested at the main international airport on Monday and sent to a jail and a deportation centre.

The 37-year-old had been planning a holiday on the majority Buddhist island when she was detained over the tattoo on her upper right arm which Sri Lankan authorities found offensive.

“I have been treated very badly. I am exhausted,” Ms Coleman said as she waited to board a Sri Lankan Airlines flight to London on Thursday.

Ms Coleman said that she feared being raped while in Negombo prison near the airport after a male guard made lewd gestures indicating that he wanted to have sex with her.

“I was subject to sexual harassment,” she said. “I did not feel safe.”

A female guard at Negombo also demanded a bribe to avoid undergoing a “thorough” body search, she said.

Coleman spent one night in the prison before being transferred to a detention centre in Colombo.

Commissioner-General of Prisons Chandhrarathna Pallegama said he would investigate any formal allegations against his staff.

“I don’t think anything like this has happened, but if she is willing to make a (formal) complaint, I
assure you that we will investigate and take very strong action,” Mr Pallegama said.

Sri Lanka’s official Tourism Promotion Bureau paid for her return ticket and has expressed regret at the entire incident.

A local magistrate ordered her jailing and deportation on Monday after police arrested her for having the tattoo of a Buddha seated on a pink lotus flower.

Sri Lanka is highly sensitive to perceived insults to Buddhism.

Ms Coleman has insisted that she was a devout Buddhist and the tattoo was out of respect and conviction.

Sri Lanka barred another British tourist from entering the island in March last year for showing “disrespect” to Buddhism by having a Buddha tattooed on his arm.

In August 2012, three French tourists were sentenced to six months in jail, which was suspended for five years, for kissing a Buddha statue in what the authorities considered a sign of disrespect.

Sri Lanka prevented US rap star Akon from visiting in 2010 over one of his music videos which featured scantily clad women dancing in front of a Buddha statue. [AFP]