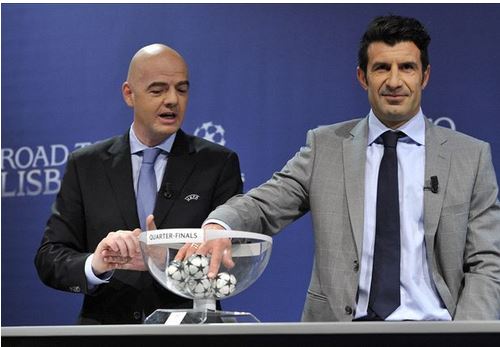 Carlo Ancelotti’s side will hope to out smart the champions and avoid a repeat of the last-four clash from the 2011-12 season.

While Guardiola’s Bayern is still buzzing after a close game against Manchester United and being crowned the German Bundesliga Champions.

Thibaut Courtois has been loaned out to Athletico for the last three years and has been impressive for Athletico making the goal keeper position his own for the duration of his loan.

Chelsea have a clause in his contract which stipulates should they play Athletico, Athletico will have to pay Chelsea to field him but UEFA recently ruled that clause to be null and void.

Real Madrid and Athletico are at home for the first leg, while the return leg will be held at Munich and London respectively.

The first leg is scheduled for Tuesday 22 and Wednesday 23 April and the return legs the following week, Tuesday 29 and Wednesday 30 April while the final will be held in Lisbon on May 24.