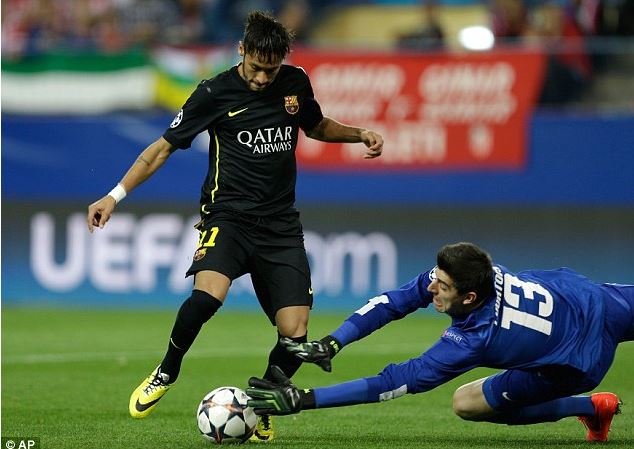 UEFA made the decision before the two teams were drawn against each other in the Champions League semi-finals draws held few minutes ago, warning the Blues on their demand of £5million before the Spanish club could play the on-loan goalkeeper

According to UEFA, the contractual clause Chelsea is holding on unto is against the rules.

Cash-strapped Atletico would have struggled to find the money for the fee, but this has now been ruled out by the governing body.

A statement from UEFA said: ‘The integrity of sporting competition is a fundamental principle for UEFA.

“Both the UEFA Champions League and the UEFA disciplinary regulations contain clear provisions which strictly forbid any club to exert, or attempt to exert, any influence whatsoever over the players that another club may (or may not) field in a match.

“It follows that any provision in a private contract between clubs which might function in such a way as to influence who a club fields in a match is null, void and unenforceable so far as UEFA is concerned.

“Furthermore, any attempt to enforce such a provision would be a clear violation of both the UEFA Champions League and the UEFA disciplinary regulations and would therefore be sanctioned accordingly.”

The Chelsea keeper has been on loan at Atletico for three seasons but the Madrid club’s president, Enrique Cerezo, told Spanish radio after the quarter-final triumph over Barcelona they would be ‘unable to pay’ the added fees which were part of the loan agreement.

Courtois, 21, who will represent Belgium at the summer World Cup, has yet to play for Chelsea, although he has been earmarked as Petr Cech’s successor.

He has impressed in Atletico’s bid for a Champions League and La Liga double after joining Chelsea from Belgian club Genk in 2011 when just 18.