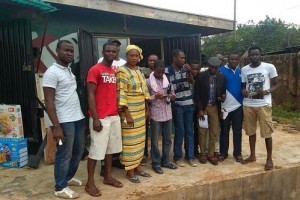 Firstly, I must give it up to everyone who left their homes in different parts of the country to fight for Yusuf Isiaka Onimisi’s (@Ciaxon) freedom yesterday.
A lot of people didn’t turn up in Ibadan, but 12 people gathered and they marched to the DSS office in Ibadan.
Everything went on fine and people sang their praises until Chinasa Ikelu, one of the protesters called Kemi Olunloyo a Judas.
According to Chinasa when SSS officers stopped them at their entrance and asked Kemi Olunloyo what they came there for, she said she was a media person and came to cover the protest.
Chinasa said they all looked at themselves in shock, and kept quiet to watch what will happen next.
Please read Chinasa’s account of the incident below: –