Lagos State would not witness any significant improvement in electricity supply until 2018, this is according to the state’s commissioner for Budget and Economic planning, Ben Akabueze. 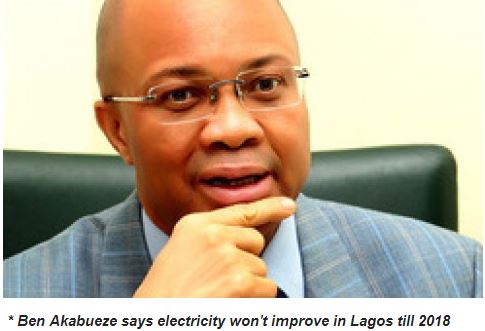 Speaking with newsmen after a meeting with power investors at the end of the Lagos Economic Summit last Thursday, Mr. Akabueze said the poor electricity supply in Lagos State won’t improve sooner than five years time.

“The truth from what we heard, it won’t be anything sooner than five years to see any significant improvement in the power situation and in the power sector. When they say short term, we are talking about five years,’ Akabueze said.

The commissioner said the 7th Lagos Economic Summit, Ehingbeti 2014, was held to present an enabling environment for investors who are majorly from Europe.

“Well, I think we’ve provided the platform and a good one at that to discuss the issues; and a lot of people who attended now understand better, the nature of the power industry, what the issues are, what it will take to solve them.

The commissioner also allayed fears that the economic summit might be jettisoned by the coming administration.

The 7th edition of the Lagos economy summit, Ehingbeti 2014, held between April 8- 10, 2014, at the Eko convention centre of Eko Hotel in Lagos.