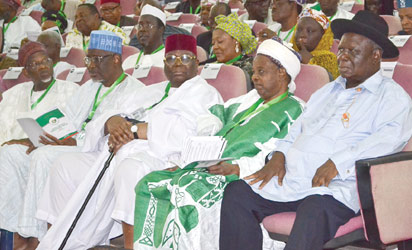 The National Conference Committee on Political Restructuring, has adopted a resolution for the creation of an additional state in the South- East to ensure equity among the six geo-political zones.

Co-Chairmen of the committee, Mr Mukaila Muhammed and Gen. Ike Nwachukwu, announced this on Thursday in Abuja at the end of the committee’s session, saying the decision was an overwhelming resolution by its members.

“We agreed on the issue of state creation whereby majority of our members expressed the opinion that the South-East zone which had five states compared to other zones”, they said.

The Co-Chairmen said the South-East zone deserved to have six states like other zones that have six or seven states each.

“Therefore, it was agreed that one additional state should be added to the South-East zone. That is the first part of our resolution on the issue of creation of states.

“The second part is a resolution that we recognise that there are other genuine demands for creation of states from all the other zones including the south-east itself.

“We said all these demands should be looked at, and decisions made should be taken based on the merits of such demands.

“We are to look at the viability, contiguity and other factors that determine creation of states.

“These are the highlight of the decisions taken since we started our meetings so far”, they said.

According to him, the committee took cognisance of the need for fairness, equity and merit in reaching consensus on the issues it deliberated on.

“My committee members discern the need for Nigeria to have more states, and the need to have it based on merit.

“And particularly, to give the South-East at this conference an additional state bringing it in line with other zones with six states.

“At the end of the day, we will be recommending that there should be equality of states in the zones, and then allow the zones to decide which state should be created.

“This is because there are agitations across the country for creation of states, and one must be able to listen to them.

“And some of those that made the requests did so because they felt marginalized”, Nwachukwu said.

He said if there was provision for rotation of the presidency, governorship, chairmanship in the constitution it would probably assuage some fears.

“Those fears are genuine; there are states that people from particular areas may never be governors and that is not right.

“We are in democracy which has been fashioned out to ensure that no section is denied for being a minority; not just ethnic, but there are minority interest groups”, he said.

The News Agency of Nigeria (NAN) reports that the committee resolved that the local government system that is referred to as the third tier of government should cease to be so.

It resolved that the number, structure and form of local government should be left for the respective states to determine.

It also resolved that group of states could cooperate on certain key issues of common interest through the formation of a commission to pursue common aspirations they may have. (NAN)