The Economic and Financial Crimes Commission (EFCC) a couple of days ago intensified its arrest of alleged fraudsters and conmen and a couple of days back arraigned the duo of Isiyaku Ibrahim and Alhaji Mallam Usman Hussain before a Federal High Court in Kano state on 14-count charge bordering on conspiracy and obtaining money by false pretence. 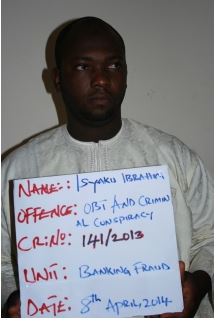 The complainant Haruna Bello alleged that he came to know Isiyaku Ibrahim in November 2012 when Isiyaku Ibrahim begged him for a place to sleep and N400 for transport fees.

A couple of days after, Bello reported that he received a call which he couldn’t trace and the person claimed to be Isiyaku Ibrahim. The voice at the other end of the call told Bello he was a ‘spirit’, who appeared to him in human body. The caller told Bello that his thankfull and appreciates his favour in housing and giving him money that night and asked him to liaise with a certain Mallam (Usman Hussain) whom, he said, understands the workings of the spirit realm.

Bello met with the Mallam and the Mallam began demanding money from him to buy things such as perfumes, Qur’an Horse and so on.

Bello said when he got tired of their demands; he sought to severe the relationship but that they threatened to destroy him and his family. One of the count reads: “that you Isiyaku Ibrahim on or about 13th February 2013 in Kano within the jurisdiction of the Federal High Court did with intent to defraud obtained the sum of N500, 000 (Five Hundred Thousand Naira Only) from one Haruna Bello Madaki through your First Bank Account No; 3066211531, by presenting yourself to be spirit (Jinn) and that he assisted you with shelter and transport fare while in human form some days ago and as such revisited him with a view to reciprocating the kind gesture by granting him protection because he has a lot of enemies and providing him business fortune which pretence you knew to be false and thereby committed an offense contrary to section 2(b) of the Advance Fee Fraud and Other Fraud Related Offences Act, 2006 and punishable under section 2(c) of the same Act.”

The two accused persons pleaded not guilty to the charges.

However, Justice Riman adjourned the case to April 28, 2014 for ruling on the bail application of the defendants and ordered that the accused persons be remanded in prison custody.