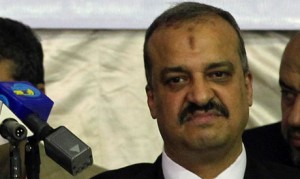 An Egyptian court on Saturday sentenced an Islamist leader on trial for murder alongside deposed president Mohamed Morsi to a year in jail for insulting a prosecutor, judicial sources said.

Top Muslim Brotherhood member Mohammed al-Beltagui and Morsi were both in court Saturday accused of inciting the killing of opposition protesters outside the presidential palace in Cairo in December 2012.

Their trial is part of a relentless crackdown targeting Morsi and the Brotherhood since the military ousted him on July 3, ending a turbulent single year in office.

The sources said Beltagui, who is currently in custody along with scores of other Brotherhood leaders, was condemned for “insulting” a prosecutor during Saturday’s hearing, but without elaborating.

It is the first time a senior member of the Brotherhood has been given a jail sentence since Morsi’s ouster.

Both Morsi and Beltagui are also on trial in two other cases on jailbreak and espionage charges.

If found guilty, the defendants could face the death penalty.

They are accused of organising jailbreaks and attacking police stations during the 2011 uprising that toppled autocratic president Hosni Mubarak.

Prosecutors allege the attacks on police stations and the jailbreaks, in which Morsi and other political prisoners escaped, were a Brotherhood-led conspiracy to sow chaos.

In the espionage trial, Morsi and 35 others are accused of conspiring with foreign powers, the Palestinian Islamist movement Hamas and Shiite Iran to destabilise Egypt.

A police crackdown on Morsi supporters has killed more than 1,400 people, according to rights group Amnesty International.

More than 15,000 Islamists, mostly from the Brotherhood, have also been jailed, and hundreds have been sentenced to death after often speedy trials. [AFP]