David Adeleke, better known as Davido, has become a force in the Nigerian music scene. Now, the young man wants to try his luck in the make-believe world as he launches into Nollywood. 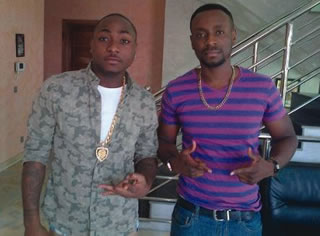 Courtesy of his cousin, Ikechukwu Ojeogwu, a rookie producer, Davido will be a part of Ojeogwu’s debut film, John Zerebe.

Ojeogwu, who told Saturday Beats that Teco Benson would be directing the film, insisted he was featuring Davido in the movie because he (Davido) fitted the role.

“I didn’t use him because he is my cousin. I didn’t use him to sell the movie as well. David fitted very well into the role and we had to use him as well,” Ojeogwu said.

The young producer, who is also playing the lead role in the movie, said he was yet to get the lead actress in the movie.

The Babcock University Banking and Finance graduate said he got into the movies for his love of the industry.

“I have always wanted to be in the movies. I have a passion for acting. I have featured in the popular sitcom, The Bella’s Place. This is not a one off thing; I intend to be a force in the movie industry,” he said.

His mother, nee Adeleke, married his father from Delta State but Ojeogwu said all members of his family have been supportive, including his mother’s siblings.

“I have learnt a lot from my uncles. They support me in whatever I want to do. I learn from them as well. I am not getting into the movie industry to be as popular as David, my cousin. This is just what I love doing and not because of the fame that comes with it,” he said.