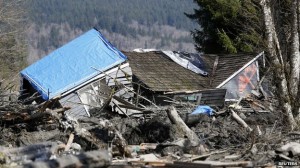 The death toll from the mudslide that hit the Washington town of Oso has risen to 37.

The Snohomish County medical examiner’s office said on Tuesday that it had received one more victim.
The person’s name has not been released.

The sheriff’s office says seven other people are still listed as missing.

A search for bodies continues in the debris left when the March 22 landslide raced across the North Fork of the Stillaguamish River and buried dozens of homes in the riverfront community about 90km northeast of Seattle.