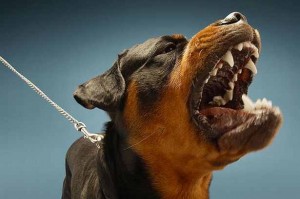 A dog owner whose pet rottweiler was sent a voting card is being investigated by police after the council complained.

Russell Hoyle, from Norton, Teesside, is alleged to have provided false information to the electoral register after his pet Zeus was issued with a card.

Stockton Borough Council has informed Cleveland Police and the force confirmed an inquiry has begun.

Mr Hoyle told the Middlesbrough-based Evening Gazette newspaper he did not put his dog’s name on the electoral form, and merely told a canvasser who came about the people living at his address.

He told the newspaper: “I remember saying ‘There is myself and my wife. My son is not old enough to vote’.”

Then he said he joked: “We have got Zeus living here as well and he is 63 in dog years.”

The security guard said he was stunned when a polling card came for the dog, and a story about it was published in the Gazette.

Now he has received a letter from Stockton Council saying the matter was being investigated by police.

Part of the letter said: “Following reports in the media that your dog has been issued with a poll card for the forthcoming European Elections, I have checked the voter registration form which we received from your property and can confirm that your dog’s details were added onto the form by yourself.

“I would like to stress that every household is legally required to return an electors’ form and it is the householder’s responsibility to make sure that all details provided are accurate.

“Providing false information on this form is an offence.”

Cleveland Police said it had received information from the council’s Deomcratic Services department and an investigation had begun.

A council spokeswoman said: “Though we appreciate that registering a dog to vote might seem amusing, it is an offence to provide false information on an electoral registration form and we are obliged to refer cases like this to the police.

“It is the householder’s responsibility to make sure all details provided on the form are accurate and they must also sign a declaration at the bottom of the form confirming that this is the case.”

Share
Facebook
Twitter
WhatsApp
Previous articleWorld’s First Beekeeping DONKEY Gets His Own Custom Suit in Brazil
Next articleCreepy Or Romantic? Man Photoshops Himself Into Girlfriend’s Childhood Photos
- Advertisement - Ad ==> TRUTH FINALLY OUT! Discover how a young Nigerian graduate now makes a consistent 40k per week doing a legitimate online business. You too can start yours now, click here!!!