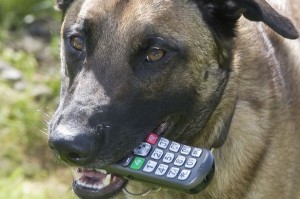 Police dashed to the scene of a 999 emergency – and found a dog which had stolen its owner’s phone had made the call.

Mary Amos-Cole had to chase her pet Leighton around her garden after the playful two-year-old Belgian Malinois snatched a cordless landline handset.

The grandmother-of-five eventually cornered the dog and was stunned when a police car turned up minutes later.

Mary, who is in her 60s, said: “The officer said the 999 call had been made and all they could hear at the other end was heavy breathing.

“It was obviously Leighton panting as he was running around with the phone in his mouth. He just wants you to chase him and that’s what I did for a bit.

“If you don’t chase him, he drops whatever is in his mouth to tempt you to try and get it. But before you can, he scoops it up again and he’s off.

“As he was running about with the phone, I could hear it beeping but I had no idea he had managed to dial out with a 999 call. He’s downright naughty, but I would never swap him.”

Mary was gardening with her husband Geoff Cole, 55, when Leighton made off with their phone handset on Thursday.

Police feared someone’s life was in danger when the 999 call came through. But officers realised it was a false alarm after turning up at Mary’s home in Edlesborough, Bucks.

Mary explained: “When he was a young dog and we were leaving him in the house we used to put him in a cage and set the burglar alarm.

“But Leighton would be determined to get out and he was so strong that he could. He must have got through eight cages.

“Once he was out scampering around the house it triggered the burglar alarm and the police would come out. All in all the police have been out because of him 7 or 8 times.”

Mary said police have also “quizzed” Leighton to see whether he barked when burglars raided a nearby property.

A spokeswoman for Thames Valley Police confirmed that the incident. She said: “We had a silent 999 call from a phone. It was later confirmed by the occupant that a dog had called 999.”

It is not only dogs which make unnecessary 999 calls. Leicestershire Police recently released recordings of stupid questions from callers with rather fewer excuses.

Belgian Malinois dogs are highly intelligent, courageous and inquisitive. They have been used by the CIA and security forces across the world. One reportedly helped US Navy Seals storm the compound in Pakistan where Osama bin Laden was killed.