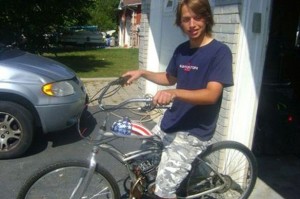 A driver who knocked over and killed a teenage cyclist is suing the dead 17-year-old for the “emotional trauma” she has suffered.

Brandon Majewski, from Alcona in Canada, was out cycling with friends in the early hours of a wet night in October 2012 when he was hit from behind by Sharlene Simon’s car.

But now mum-of-three Ms Simon says she is suing Brandon, as well as his parents, his brother – who has since also passed away – and the two others boys over the crash.

The Toronto Sun reports that in a statement filed at court, Ms Simon is claiming $1.35 million in damages because of her psychological suffering, including depression, anxiety, and post-traumatic stress.

She adds: “[The teeangers] did not apply their brakes properly.

“They were incompetent bicyclists.”

But Brandon’s devastated parents have been left horrified by the claim.

His dad, Derek said: “I feel like someone kicked me in the stomach. I’m over the edge.”

A lawyer for the boys’ families has also launched a law suit against Ms Simon, covering medical expenses and funeral costs for Brandon.

The Toronto Sun said Ms Simon’s lawyers did not respond to a request for comment.