The Economic and Financial Crimes Commission, EFCC, on Tuesday April 15, 2014, arraigned one Adagun Moshood Olalekan before Justice O. A Taiwo of the Lagos High Court, Igbosere, on a 17-count charge bordering on obtaining money by false pretence and possession of fraudulent documents. Olalekan pleaded not guilty to the charges. 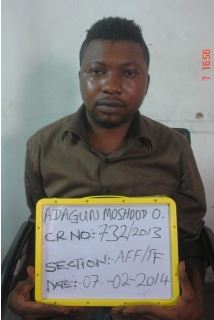 Justice O. A. Taiwo then adjourned the case to May 15 and 16, 2014 for trail and ordered that the defendant be remanded in Ikoyi prison.

Olalekan’s arrest followed a complaint by the United States Department of Homeland Security, alleging that the accused had been impersonating one Lieutenant-Colonel Cabin Cayce Webb, an American soldier on special duties in Afghanistan.

Part of the charge against Olalekan reads: “Adagun Moshood Olalekan (a.k.a Lieutenant Colonel Cadin Cayce Webb) on or about 6th day of October, 2013 in Lagos within the Lagos Judicial Division with intent to defraud obtained the sum $800 (Eight Hundred United States Dollar) by false pretence from Diana Snow by falsely representing to her that you are one Lieutenant Colonel Cadin Cayce Webb which representation you know to be false”.