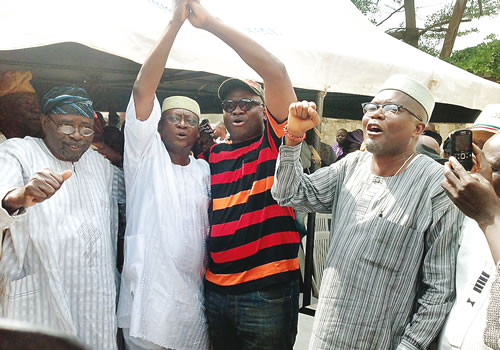 The governorship candidate of the Peoples Democratic Party (PDP) and former Governor of Ekiti State, Mr Ayo Fayose, and one of the leading governorship aspirants of the party, Prince Adedayo Adeyeye, on Thursday, publicly set aside their political differences as they joined forces in their bid to ensure that PDP sends the incumbent Governor, Dr. Kayode Fayemi of the All Progressives Congress (APC) packing in the June 21 election.

Fayose, who described Adeyeye as “a formidable figure in the PDP, who cannot be ignored” while speaking at the reconciliatory meeting, appealed to President Goodluck Jonathan to nominate Adeyeye as a minister to replace Navy Captain Caleb Olubolade, another aspirant, who recently resigned to contest the party’s governorship ticket.

The PDP in Ekiti has been divided since Fayose defeated about 13 other aspirants to pick the sole governorship ticket of the party with most of his co-contestants refusing to recognize his candidature, instead calling for a consensus candidate.

However, Thursday’s meeting saw the coming together of the Fayose and Adeyeye camp for the purpose of uniting to “dislodge the APC from power in the state for the sake of Ekiti and the Ekiti people”.

The reconciliation meeting, which held at the secretariat of the Prince Adedayo Adeyeye Movement (PAAM) in Ado Ekiti, the state capital, was attended by members of PAAM and those of the Ayo Fayose Campaign Organisation as well as many other members of the party.

Fayose said on the occasion that he was not seeking re-election as governor of the state to carry out vengeance against anybody, saying among other things, the major task before him would be to unite all members of the party and the state at large if he wins the polls.

He said, “I am not coming to Ekiti to be vindictive. I think it would mean I don’t know what I am doing if I should return to Ekiti Government House after seven years and start running after anybody.

“I want to plead with all the aggrieved aspirants to bury the hatchet and work for the party’s success in the forthcoming election, saying “I promise not to betray anybody in the PDP, including Adeyeye.

“I also want to plead with our supporters to refrain from fanning the embers of discord. Let us be united and ensure that we win this election. This is a great task we have to achieve”, Fayose said.

Speaking about his resolve to remain in the PDP despite his loss at the primaries, Adeyeye said “nobody can be more aggrieved than me among the aspirants on the conduct of the primaries. But as a party man, I have to forget the past and work for the emergence of our candidate at the poll.

“I was one of the aspirants who fought vigorously for zoning of the governorship to the South, but the authorities, I mean the powers that be, didn’t see it that way.

“But despite this, I promised that I will not join any other party because I believe if we come together and win the election, everybody will be brought on board. So to me, there is no victor, no vanquished”, he stressed.