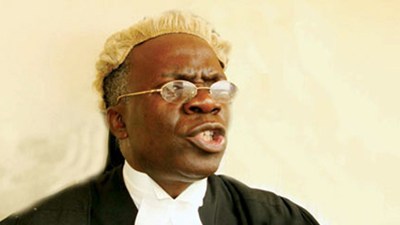 Lagos lawyer and human rights activist, Femi Falana, SAN, has blamed the recent rise in killings by herdsmen in Nigeria on government negligence.

Falana, who made this known in a statement on Monday, said the incessant killings are the direct consequences of government’s abdication of its constitutional duty of protecting lives and property.

“The Federal Government has refused or failed to implement the official policy which would have halted the incessant mayhem unleashed on innocent people by the Fulani cattle rearers”, he said.

In the past few weeks, farming communities in Benue and Kaduna States have been invaded by suspected Fulani herdsmen, who left in their trail death, destruction and fear. At least 300 people have been killed in Southern Kaduna and in Benue State in less than a month.

The lawyer particularly blamed government for not implementing the recommendations of the Sheikh Ahmed Lemu Presidential Panel set up by the Federal Government to probe the 2011 Post Election Violence and Civil Disturbances in some Northern States.

The panel’s findings noted that the destruction of cultivated crops by cattle as the major bane of the frequent clashes between herdsmen and farming communities.

Mr. Falana said the committee’s recommendation that government ensure each state clearly demarcates its cattle grazing routes, which will then be harmonised with those of adjacent states, was completely ignored by government.

“If the directive contained in the White Paper issued by the Federal Government since August, 2012 had been implemented, the recent violent clashes between the Fulani herdsmen and many farmers would have been averted”, he said.

He advised the
government not to waste time on a new investigation into the cause of the recent violence but to implement the recommendation of the panel as a means to solving the problem.

Mr. Falana also lampooned the Christian Association of Nigeria, CAN, for describing the plan by government to create grazing reserves for Fulani herdsmen in all the states of the federation as a plan aimed at Islamising Nigeria.

“The CAN leadership ought to realise that there is no civilised country in the world where cows, goats and pigs are allowed to roam the streets. Indeed, it may interest the CAN leadership to know that majority of the members of the Sheikh Ahmed Lemu Panel who recommended the acquisition of cattle grazing zones for the Fulani herdsmen are Christians. The Federal Government should ignore the diversionary position of the CAN leadership in the search for a permanent solution to the perennial crisis”, Mr. Falana said.