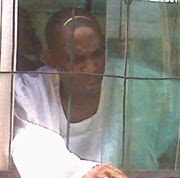 Alphonsus Ezie, a 56year old prophet with the Celestial Church of Christ Igando District, Lagos State has been arrested and remanded in prison by the police for tricking his congregation with a false prophecy, PM news reports.Prophet Ezie had on a Sunday service prophesied seeing some members of his congregation traveling to Netherland for greener pastures and coming back home successful. He asked all those interested in making the prophecy fulfilled in their lives to meet with his friend, Mr Samuel, a travel agent, to help them with their travel papers. And Mr Samuel disappeared with their money..lol. Continue
16 unsuspecting members  excitedly met with  Mr Samuel in a hotel in Ejigbo where they made various payments to him for their travel documents. Among those who paid for the documents were;
Julius Adefisoye, N217,000;
Mathew Oyedele, N125,000;
Kinsley John, N120,000;
James Obiakpo, N240,000, who paid for himself and fiancee;  Adewumi Osisoya N70,000; Akimbami Kunle, N50,000 and Lekan Ogundepo, N50,000.

Trouble started when the members waited for months without seeing Mr Samuel or the travel documents they had paid for. They alerted the Igando Police Station and the prophet was arrested alongside Mr Samuel. Both men were charged to the Ejigbo Magistrate court where they pleaded not guilty.

A N100,000 bail was set for both men with two sureties in like manner and are currently in police custody pending when they fulfill their bail conditions.