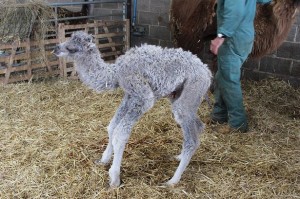 Doris the camel lives on a farm with no other male camels – so it came as a big shock today when she gave birth.

Farmer Andrew Henshaw could hardly believe his ears when he was called over by a colleague to help tug a baby calf out of its proud mum.

Doris, who lives with her half-sister Delilah, has not been near a male camel for more than a year.

Andrew, 46, and his family, who run a farm shop and tea shop, had no idea Doris was in the family way.

Andrew, who was about to open the tea shop when a livestockman ran over to tell him the startling news about Doris, said: “I told him ‘you’re joking’. By the time we got there the feet and head were out so we gave it a tug and it came out.

“This was totally out of the blue. When he was first born he sounded like a dinosaur with the noise he was making, like something off Jurassic Park.

“Now a few hours later, he looks like a giraffe with his long neck, or the Loch Ness Monster because of his two floppy humps.”

Andrew, who runs the farm shop near Richmond, North Yorks, joked that he half suspected Jimmy the llama in the pen next to Doris may be responsible, because he is such a rascal.

He reckons the mystery can probably be explained because camels can take between 12 and 15 months to give birth after becoming pregnant.

Andrew thinks Doris must already have been pregnant when she was taken to North Yorks from a farm in Cornwall.

The family will keep the male baby camel and are running a competition to name the new arrival.

Kevin had been popular with visitors so they hoped Doris and Delilah would be too.

Now the family have got a little baby camel to wow visitors.