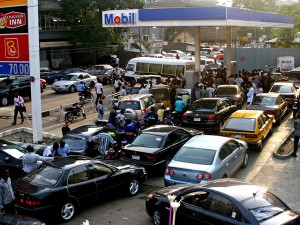 In a bid to forestall a repeat of the recent acute fuel scarcity caused by the late release of the first quarter 2014 fuel import allocation, the Federal Government has approved the release of the import allocation for the Nigerian National Petroleum Corporation and the private Oil Marketing and Trading (OM &T) companies for the second quarter 2014.

This is coming as the government has also approved supplementary allocation for the first quarter 2014 to ensure additional imports that would supplement the initial allocation.

Confirming this development on Friday, the Petroleum Products Pricing Regulatory Agency (PPPRA) said in a statement that the Minister of Petroleum, Mrs. Diezani Alison-Madueke gave the approval to boost the national fuel supply, which had been chaotic in recent months.

The brief statement, which did not disclose the identity of the beneficiaries, however, commended the minister and charged marketers to take advantage of both the first quarter supplementary fuel allocation, as well as the early release of the second quarter allocation, to bring in their import cargoes into the country.

PPPRA also promised to ensure prompt processing of documents for all verified imported products for quick payment of subsidy.

The country is yet to emerge from the recent fuel crisis, which was caused by the late release of the first quarter import allocation

The first quarter import allocation, which ought to have been released at the end of December 2013 or the beginning of January 2014 to enable NNPC and the private marketers to import products for the months of January to March, was delayed till February 21, 2014, causing months of scarcity and hardship for motorists and other users of Premium Motor Spirit (PMS), popularly called petrol.

Group General Manager in charge of Group Public Affairs Division of the NNPC, Mr. Ohi Alegbe confirmed the early release of the second quarter import allocation to THISDAY last night, saying the measure will boost fuel supply in the country.

But in its characteristic manner of ensuring that quarterly import allocation is shrouded in secrecy, the PPPRA did not release the details of the beneficiaries of the allocation for the second quarter.

However, unofficial source at the agency told THISDAY that the NNPC, being the largest importer of petroleum products, cornered over 50 per cent of the import allocation.

Some of the other beneficiaries, according to him, include NIPCO Plc, Oando Plc, Conoil, Mobil Oil, Masters Energy, Techno Oil and Folawiyo Oil and Gas, Total Nigeria Plc, and Mobil Oil.
The Executive Secretary of the Major Oil Marketers Association of Nigeria (MOMAN), Mr. Thomas Olawore, could not be reached last night.

Before the immediate past Executive Secretary of PPPRA, Mr. Reginald Stanley, came on board in November 2011, the business of fuel importation into the country was an all-comers’ affair.
The development resulted in manipulations and malpractices that swelled subsidy claims to about N2 trillion, with a total of 128 companies engaged in fuel importation, thus providing an opportunity for the abuse of the system.

The volume of imported products also dropped from 5.036 billion litres in the first quarter of 2012 to 4.20 billion litres in the third quarter of 2012.
However, concern that these accredited importers’ difficulty in accessing credits from the banks could fuel another crisis in the system, prompted the PPPRA to expand the list to up to 40 participating companies since 2013. [Thisday]