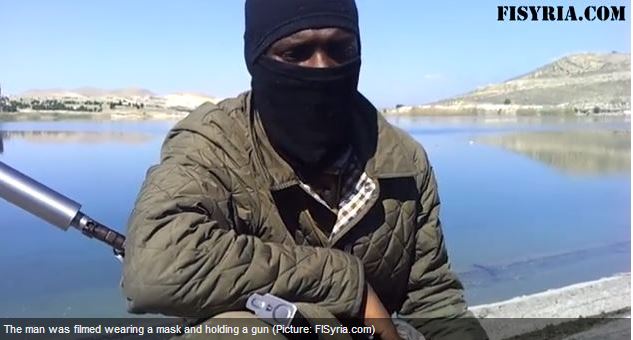 A former Arsenal footballer who grew up with Cristiano Ronaldo is now fighting in Syria alongside extremists, it has been claimed.

The man, who is said to have turned his back on a moneyed lifestyle in Europe, was filmed in two videos posted on an extremist website in which he addresses people in Ukraine and calls on others to join the al-Qaida-affiliated Islamic State of Iraq and Syria (ISIS).

He is seen wearing a black mask to cover the majority of his face and wields what appears to be an AK-47 as he talks to his audience in heavily accented English.

In the videos, which were posted on Russian website FiSyria.com with Cyrillic subtitles, he refers to the West as ‘animals’ and ‘dirty people’.

The text around the video on the site, which is viewed as one with close links to ISIS, claims that the man ‘grew up with Ronaldo, played for Arsenal and left football, money and European way of life in order to make the path of Allah’. It also says he was originally from Portugal and was radicalised two years ago.

During the first of two four-minute posts, he is introduced in the English subtitles as Abu Issa Andaluzi from Sham.

He then goes on to say: ‘My advice to you is that we are in need of all types of help from those who can help us in fighting the enemy.

‘Welcome, come and join us and from those who think that they cannot fight they should also come and join us because it maybe that they can help us in something else, for example help with medicine, help us financially, help us with with advice, help with any other qualities they may have and any other skills they might have, and they can give and pass on this knowledge, and we can take whatever is beneficial and that way they will participate in jihad.’

Arsenal are said to be investigating the claims that the man is a former player at the club but a spokesman told the Sun: ‘We do not recognise the individual from the published clips and we don’t have any record of a [person of this name] representing the club at any level.’