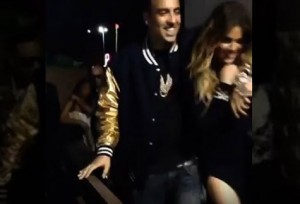 The “Pop That” rapper and newly-single Khloe Kardashian are sparking romance rumors after their weekend together.

According to TMZ, Kim’s sister was by French’s side as he went house hunting for a 4,800 sq. ft. Hollywood Hills home. The 4-bedroom, 4-bath house includes a wine and cigar cellar and rents for $29,000/month.

They also hit up Pink Rhino gentlemen’s club in Phoenix. French put his arm around Khloe as they entered the venue before blowing $7,000 on strippers.

Insiders say the two were “close” all night, taking photos with fans, but never posing together.

On Friday, they were also spotted at Diddy’s son Christian Combs’ 16th birthday party at 1 OAK in L.A.

But they’re just friends, claims one insider. “Nobody is occupying her time in a romantic way and yes, she’s good friends with Frenchie but it’s strictly platonic and in no way romantic,” the insider tells HollywoodLife.com. “She has a gazillion friends in hip-hop and he’s one of them … She’s just having a good time, being Khloe and wants to express her life through pictures.”

French has been romantically linked to Trina in the past, while Khloe made headlines for her relationship with The Game