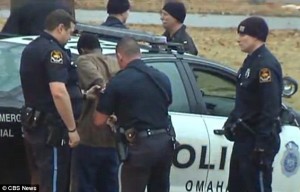 A trip to the cop shop was not what this robber had in mind when he jumped on the back of this man’s scooter.

A scooter rider, after witnessing the man robbing a girl’s handbag in the street convinced him into hopping on the back in order to make a quick getaway.

But instead of making for the hills, the rider had tricked him and drove straight to the police station.

Realising his mistake when his new-found accomplice slowed down outside the station he drops the handbag and tries to make a run for it.

But before he can make it out of the gate five officers burst out of the police station in China and arrest him.

Clearly pleased with his crime-fighting success the trickster rides off – but not without giving what appears to be a little cheer at the man’s arrest.