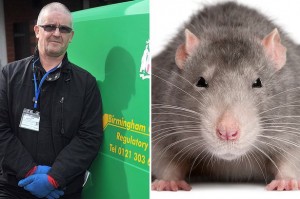 Giant rats the size of CATS are roaming the streets of Birmingham.

That is the startling claim of a second city pest controller who says he saw a rodent measuring a whopping TWO FEET on his travels.

More than 5,100 rat alerts were recorded last year in what is proving a literally growing problem in the city.

Colin Watts told the Birmingham Mail: “One of the biggest I’ve seen must have been 14 or 15 inches long.

“That was just the body, without the tail. With its tail it would have been over 2ft. It was like a small cat.”

This revelation comes just a matter of days after a huge rodent – dubbed “Ratzilla” – was snared in Sweden.

The Bengtsson-Korsas family first thought it was just a little mouse that had their cat chasing its tail until they made the gruesome discovery.

In Germany, 42-inch monstrosities have taken over the city of Halle, and could be on their way to Ireland.