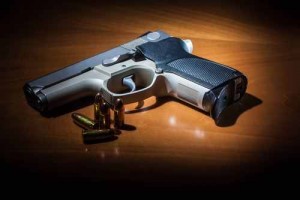 An 11-year-old girl was killed in Philadelphia Saturday morning when she and her three siblings found a loaded handgun in their home and started playing with it.

Police say her 2-year-old brother pointed the gun at Jamara Stevens and it discharged, with the bullet striking her heart. She was pronounced dead at a local hospital, and her mother was questioned by police for almost five hours, NBC Philadelphia reports. Police say she’s not cooperating. No charges had been filed as of yesterday, the Philadelphia Inquirer reports.

The mother’s boyfriend allegedly left the gun at the house the night before, and the kids—who had been with their mother in her bedroom—found it on top of the refrigerator when she left to use the bathroom. A 14-year-old brother got it down from the fridge, and Jamara was shot while their mother was still in the bathroom.

Investigators determined the 2-year-old was the one who pulled the trigger because there were traces of gunpowder and a burn on his arm, sources say. Another 11-year-old was shot in Philadelphia yesterday, the Inquirer notes, this one a boy who was shot at from a vehicle. He’s in critical condition.