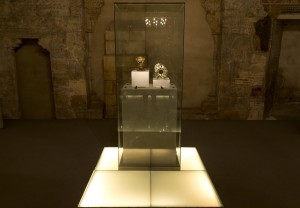 Let’s hope they did not choose… poorly.

Two historians claim they’ve identified the holy grail that Jesus drank from at the last supper, according to AFP.

Crowds flocked to see the goblet of the Infanta Doña Urraca in the Basilica of San Isidoro in León, northern Spain once the historians’ claim came to light.

The Australian explains the historians’ case.

In 2011, two medieval Egyptian parchments were discovered that mentioned the chalice of Christ, saying it was taken from Jerusalem to Cairo. From there, records show that an emir in Muslim Spain received it as a reward for helping the Egyptians during a famine. Finally, it arrived in Christendom in the 11th century after being presented to King Fernando as a gift.

The researchers’ investigation “led them to identify the upper part of [the Doña Urraca] goblet, made of agate and missing a fragment as described in the parchments, as the grail,” according to the Guardian.

But — and this is a big but — the historians admit that the goblet’s first 400 years of history are unknown, New York Post reports.

That hasn’t stopped hoards of people from visiting the potentially sacred cup.