A 23-year-old pregnant woman, Jennifer Ogbonna, raised the emotion of people recently at Zone 2, Police Headquarters, Abeokuta, Ogun State, when she narrated how her sister tricked her into slavery and sold her off with her 7-month old pregnancy. 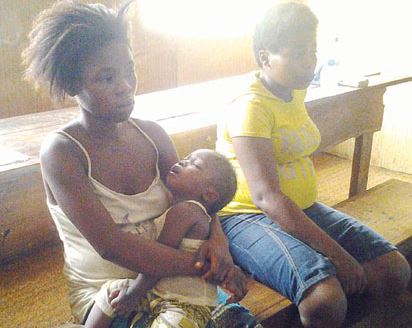 She was then transported from Aba to Abeokuta after a couple who allegedly specialized in buying human beings from all parts of the country paid N100,000 to her sister.

The lady who hails from Ebonyi State but lived and worked in Aba narrated her ugly experiences shortly after she was rescued by the Police. She said: “I was brought to Abeokuta by the woman’s husband. I don’t know that they had already paid money on my head. I only got to know in Abeokuta when I overheard the woman and her husband talking about child trafficking and I felt bad. I decided not to eat any of their food. There is one lady in that building, they call her Adeola, she would bring food for me and I would not touch it to the extent that the woman’s husband pleaded with me to eat and still I refused and said I am going back to Aba where she brought me from.

“When I said I was going to Aba, the man was angry and said before he would allow me to go back, I must pay back the N100,000 he paid my sister for myself and my pregnancy and the expenses he incurred so far on me. After that, his wife took me to one shrine and asked me to swear to an oath not to go back to Aba or tell anybody what happened, that if I try to go back or tell anybody, she will make me mad; she would make me deaf and dumb. “But, I discussed my plan to escape with another victim who I met there, she is Oluchi and she said that if I try it I will become mad, but, I insisted and I escaped. I ran away to the next street. When I ran to the street, I met some people and I narrated my experience to them. They advised me to report to the Police, that was how police got to know everything, she stated.

Investigations revealed that the notorious couple who lives in Abeokuta where they operate their illegal and nefarious business, usually travels to many parts of the country in search of their ‘commodity’. It was further gathered that the husband, identified as Ismail Yusuf, is in charge of scouting for pregnant women as he reportedly went as far as Abia, Anambra, Ebonyi and other states in the Eastern part of the country. The wife, Muyiba, was saddled with the task of nurturing the pregnant women till they deliver of their babies for onward sale. Crime Guard learnt also that Muyiba who is cooling her feet at the Police station after she was arrested was reported to had come to Abeokuta from Kwara State disguised like a herbalist and rented an apartment at Adigbe where they use as their operational base.

According to the findings, the husband, having bought their preys (pregnant women), would charm them on the spot and take them to their operational base in Abeokuta where they would nurture the victims and their pregnancies until they give birth, which they allegedly usually sell to couples that need children or for ritual purposes. It was also gathered that when these victims were bought, the couple would force them to swear to an oath not to escape. They would charm them so that they would not escape from them and people living around and security agencies would not have any clues of what they were doing in their den.

Recalling her journey in the human trafficking business, 38-year-old Muyiba said, “ I came to Abeokuta in January this year from Offa, Kwara State. I used to sell baby clothes before my shop got burnt during the crisis between Offa and Erin-Ile. I know how to prepare herbs for diabetic patients. I am a trado-medical doctor, I registered in Kwara State but not in Ogun State. I have treated three patients in Abeokuta since I have been here.” When asked what she was doing with the pregnant women she camped in her house, Muyiba claimed that “ it was their husbands that brought them to my place, to keep them in my place. I knew them through one Joy. Arrest How were you arrested, she said “ It all happened when I saw police on Wednesday night banging that we should open the door.

They came to arrest all of us. I thought my husband has run away because I was asleep when the police came. My husband is Ismail Yusuf, our children are in Kwara State. The police also arrested Muyiba’s younger sister —Seun and when she was asked her role in the incident, she passed the ball to her elder sister. According to her , I was staying with her. I just graduated last year from School of Health in Ilorin, Kwara state. I came to Abeokuta last month. I don’t have anything to say, she (Muyinba) is the one that can say anything about it.

Two weeks ago, the operatives of Nigeria Police, Ogun State Command uncovered a baby-making factory in Akute and rescued eight pregnant women, including a 16-year-old girl, arresting the proprietor of the factory, Angela Chigoeze, and her brother-in-law, Obinna Ndunaga during the raid. It was gathered that at the baby -making factory operational base which is located at No 9, Sebanjo Crescent, Off Fabolude Bus-Stop in Akute, a baby was often sold at N300,000 each, while the young girls were usually offered pittance after delivery and their babies taken from them and sold to unknown people.

Some of the victims who were rescued included three teenage pregnant women; a-16-year-old Precious Steven, Miracle Eze and Blessing Saviour who are both 17 years old. Also rescued were Jeremiah Gift, 25, Joy Okoro, 20, Stella Samuel, 19; Agnes Igbo, 22 and Vivian Princewill, 20. The proprietress of the baby factory, Angela, 39, who hails from Abia state said that she started the business last year as a traditional healing home, claiming that her husband, now at large, rented the building from where the illicit business was transacted. Angela, however, denied that the young girls were usually impregnated inside the house, adding that the pregnant women were either brought by their husbands or traced her address themselves.

Speaking on the incident, the State Commissioner for Women Affairs and Social Development , Elizabeth Sonubi, promised that government would continue to put in place the necessary security measures that would continue to nip girl child trafficking and other crimes targeted at children and women, in the bud.

The Commissioner disclosed that two of the victims had delivered two babies – male and female at the Rehabilitation Center where the State government takes care of them. She admonished the residents and people of the state to be vigilant and prevent such incident across the state, adding that people should report such incident promptly to the necessary quarters.