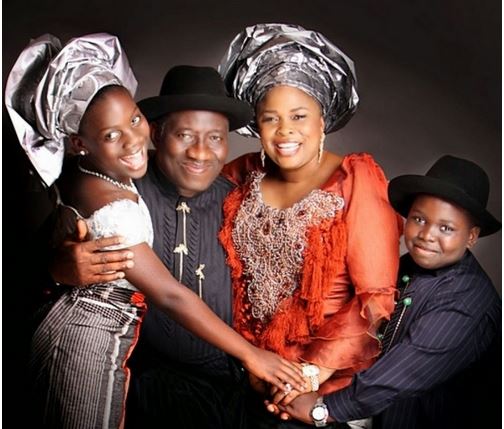 This extract reveals how President Jonathan met the first lady, how they started dating and eventually got married.
“As Goodluck Jonathan embarked on a new and challenging career in politics, he was supported and strengthened by his partnership with his wife Patience. Her parents were determined that their daughter would obtain the best education possible. This decision on their part was responsible for Patience meeting her future husband at the College of Education. He was in fact one of her lecturers in the Department of Biological Sciences.
After concluding his M.Sc. programme, he focused on his job as a lecturer at the College of Education, Rumuolumeni, while preparing for his Doctorate. At that time, he taught students reading for the Nigerian Certificate of Education(NCE) and the B.Ed. Degree. Many young ladies were among his students. One of them was the light-skinned young woman from Okrika named Patience Oba.
He found out that her native name Ebifaka, shortened to “Faka”, was similar to that of his loyal and efficient field assistant, Faka, who brought him crab specimens from Okrika for his M.Sc. thesis. Although he had been particularly circumspect in his attitude towards the issue of developing relationships with students in the past, he began to take notice of this young lady in his class. Remembering their first encounters Patience asserts that as her lecturer he first showed an interest in her because she was conscientious in her academic work.
It never crossed her mind that it would lead to a serious relationship even though she noticed his good looks. “My first impression of him was of a tall, dark, handsome young man. I also found out that he came from a good Christian home, just like I did. His humble and gentle disposition caught my attention and most importantly, his intelligence,”she narrated.
He approached her on campus one day while visiting from study leave for his Doctorate and she responded positively to his suggestion that they be friends.
Goodluck and Patience embarked on a period of courtship, with both families giving their firm consent.
The union between Goodluck and Patience, including their courtship, has lasted for more than two decades. They finally formalised the union at the marriage registry in Yenagoa with his close friend, King A.J. Turner, as witness after Goodluck had become deputy governor.
The family has been blessed with children. Jonathan also took charge of the education and upbringing of Faith the daughter of the late Engr. Ukalizibe Sakwe from Yenagoa LGA who had been the Secretary of the state PDP chapter after her father died in a road accident in 2000. He treats her as his own daughter along with his three other children who are; his son Arewera Adolphus,and his two daughters Aruabai, and Abayola.
While his marriage to Patience has weathered both domestic and political storms she says, “Both of us are from Christian homes, and our complete trust is in Jesus Christ. We pray together as a family every morning. What keeps us together is that we are each other’s best friend and soul-mate.”