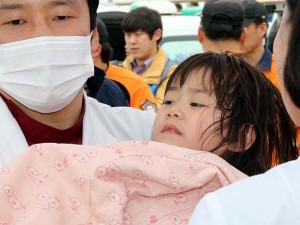 South Korean rescuers and dive teams worked frantically under floodlights as fears rose for nearly 300 people missing after a ferry sank Wednesday with 462 on board, mostly high school students bound for a holiday island.

National disaster agency officials said 174 people had been rescued, leaving 284 “unaccounted for”. There were four confirmed deaths, including a female crew member and a student. However, CNN reports six fatalities, based on a story by affiliate YTN, citing South Korean emergency officials.

There are concerns the death toll could rise sharply. The 6825-tonne Sewol listed violently, capsized and finally sank — all within two hours of sending a distress signal at 9.00am local time.

Dramatic television footage showed terrified passengers wearing life jackets clambering into inflatable boats as water lapped over the rails of the vessel as it sank 20 kilometres off the southern island of Byungpoong.

Some could be seen sliding down the steeply inclined side of the ferry and into the water, as rescuers, including the crew of what appeared to be a small fishing boat, pulled them to safety.

As night fell the coastguard said the rescue operation was continuing using floodlights and underwater flares.

“We won’t give up, although the situation is extremely worrying,” a coastguard spokesman said.

Several rescued passengers said they had initially been ordered to stay in their seats, but then the ferry suddenly listed to one side, triggering panic.

“The crew kept telling us not to move,” one male survivor told the YTN news channel.

“Then it suddenly shifted over and people slid to one side and it became very difficult to get out,” he added.

Of the 429 passengers on board the ferry, more than 300 were students travelling with 14 teachers from a high school in Ansan, just south of Seoul.

Among those confirmed as rescued, 78 were students.

“I feel so pained to see students on a school trip … face such a tragic accident. I want you to pour all your energy into this mission,” President Park Geun-Hye said on a visit to the main disaster agency situation room in Seoul.

Many of the survivors were plucked from the water by fishing and other commercial vessels who were first on the scene before a flotilla of coastguard and navy ships arrived, backed by more than a dozen helicopters.

Lee said 178 divers, including a team of South Korean navy SEALS, were working at the site, but low visibility and strong currents were hampering their efforts.

The US 7th Fleet sent an amphibious assault ship on patrol in the area to help.

The cause of the accident was not immediately clear, although rescued passengers reported the ferry coming to a sudden, shuddering halt — indicating it may have run aground.

The weather was described as fine with moderate winds and sea swell.

There are faster ways to get to Jeju, but some people take the ferry from Incheon because it is cheaper than flying. Many South Korean high schools organise trips for students in their first or second years.

The students on the ferry were in their second year, which would make most of them 16 or 17.

At the high school, students were sent home and parents gathered for news about the ferry.

Park Ji-hee, a first-year student, said she saw about a dozen parents crying at the school entrance and many cars and taxis gathered at the gate as she left in the morning.

She said some students in her classroom began to cry as they saw the news on their handsets. Teachers tried to soothe them, saying that the students on the ferry would be fine.

The Maritime Ministry said the two previous deadliest ferry disasters were in 1970 when 323 people drowned and in 1993 when 292 people died.