A witness to the early morning explosion that occurred at a crowded bus station on the outskirts of Abuja today has given a jaw dropping account of what he saw.

“More than two buses carrying workers were cut up by the blast,” witness Kingsley Ajimobi said.

“I saw many people in the bus dead, and many were injured.” 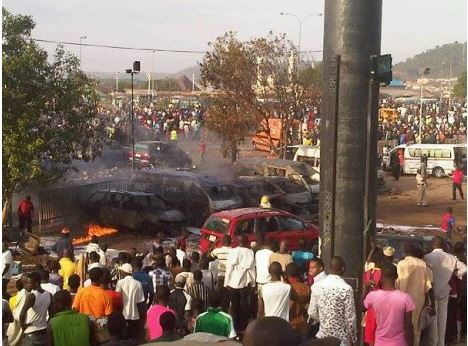 * Scene of the blast in Abuja

No fewer than 35 people were said to have died while scores were reported injured in the blast at Nyanya major bus park, the first such attack near the Nigerian capital for two years.

Body parts and blood were strewn across the station and an unruly crowd of several hundred onlookers were roaming around with security forces unable to keep them away.

“I was waiting to get on a bus when I heard a deafening explosion then saw smoke. People were running around in panic,” said Mimi Daniels, who works in Abuja.

Also, a foreign media house cameraman said he saw 20 bodies at the station near Nyanyan bridge, south of Abuja.

Another news reporter was also quoted saying that he saw at least 15 bodies separately loaded into waiting ambulances.

Police and the military did not immediately respond to requests for comment.