A Harvard professor and some scientists are claiming a fragment of papyrus seemingly mentioning that Jesus had a wife is an ancient document and not a forgery. 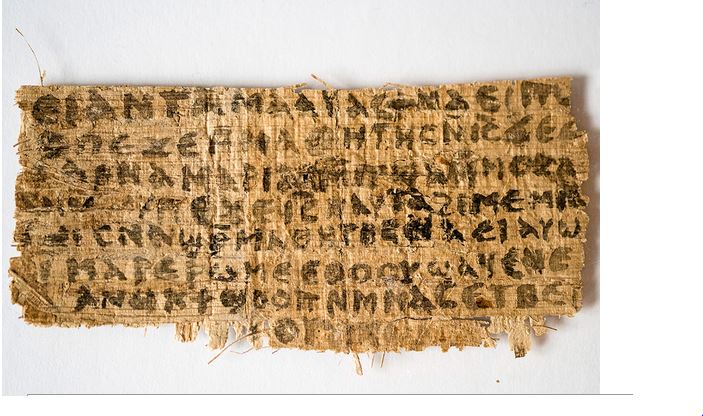 Following a series of tests, the papyrus is said to be written in Coptic and contains a dialogue in which Jesus refers to “my wife.”

Karen King, a professor at the Harvard Divinity School, writes in the Harvard Theological Review that the papyrus is almost certainly a product of ancient Christians and probably dates to eighth-century Egypt, based on carbon dating and chemical tests on the ink.

According to Prof King and her team, none of the testing has produced any evidence that the fragment is a modern fabrication or forgery.

It was gathered that the fragment, which has some legible lines on the front and on the back, contains the words: “Jesus said to them, ‘My wife …. She will also be my disciple.”

Malcolm Choat from Macquarie University examined the fragment at HDS and offered an independent assessment of the handwriting.

Prof King first announced the existence of the fragment in September 2012, at the International Coptic Congress in Rome, where she dubbed it “The Gospel of Jesus’s Wife.”

The use of the word “gospel” refers to the fragment’s most distinctive claim that Jesus was married.

Her announcement caused controversy among Christians and religious scholars, many of whom believe the document may be a forgery because of the poor grammar, shape of the handwriting and the ink’s colour and quality.

The Vatican newspaper also released an editorial after the announcement declaring it a fake.

However, Prof King has stressed the text does not prove Jesus actually had a wife, but suggests ancient Christians wrote about this possibility.

“The main topic of the fragment is to affirm that women who are mothers and wives can be disciples of Jesus—a topic that was hotly debated in early Christianity as celibate virginity increasingly became highly valued,” Prof King said.

“This gospel fragment provides a reason to reconsider what we thought we knew by asking what the role claims of Jesus’s marital status played historically in early Christian controversies over marriage, celibacy, and family.”

But Brown University Professor Leo Depuydt, in an analysis also published Thursday by the Harvard Theological Review, remains unconvinced and argues the text contains grammatical errors that a native Coptic speaker would not make.