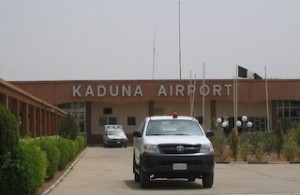 The control tower of the Kaduna Airport was yesterday ravaged by fire, severely damaging it.

According to witnesses, fire started briefly after 3pm on Easter Sunday and was not put out until the control tower was razed down.

“As I am talking to you now, fired has razed down the control tower,” a witness at the scene told PM News.

The airport was subsequently closed following the damage done to the control tower.

Yakubu Dati, spokesperson of the Federal Airports Authority of Nigeria (FAAN) however said the fire was “minor” and had been brought under control. All personnel on duty were safely evacuated, authorities said.

“The Kaduna airport has been temporary closed down following a minor fire incident at the control tower, which has since been brought under control with no casualties,” said Datti.

Meanwhile, a mobile control tower has been ordered to be deployed from Abuja so that the airport would be able to reopen Monday evening.

A staff of the airport said the fire may have been caused by an electrical fault. Investigations are however underway to determine the cause of the fire, Mr. Datti, who is the general manager, corporate communications for the Federal Airports Authority of Nigeria, FAAN, said.