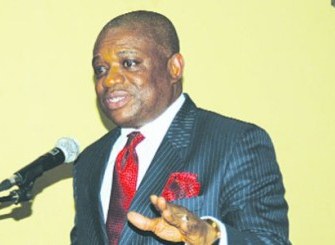 Erstwhile governor of Abia State and Peoples Democratic Party, PDP, chieftain, Dr. Orji Uzor Kalu, has lauded the decision of the Committee on Political Restructuring of the National Conference to propose the creation of additional state in the South East geopolitical zone.

Kalu said if successful, the move would be one of the numerous steps that would heal the wounds of marginalization that had been inflicted on Ndigbo over the years.

In a statement on Sunday issued by his Special Adviser on Media, Oyekunle Oyewumi, the ex-governor hailed the committee chaired by Mukaila Muhammed and General Ike Nwachukwu, for such a laudable step, adding: “If the proposal is eventually approved, it will be a great relief for me as I have consistently canvassed this same position.

“There is no point having a union in which one out of six is considered the weaker or less privileged partner”.

The South East is the only region with five states.

Others have six states apiece with the exception of the North West, which has seven

In the statement, Kalu commended the government of President Goodluck Jonathan for building on the initiative to assuage the feeling of marginalization inflicted on the Igbo within a united Nigeria.

He said that one of such steps taken in the immediate past was the appointment of an Igbo man (Azubuike Ihejirika) as the Chief of Army Staff by the Jonathan administration. He noted that the failure to appoint an Igbo person to the exalted position of the Chief of Army Staff could only be interpreted to mean that the Igbo had not been forgiven for their perceived negative role in the Nigeria-Biafra civil war that took place between 1967 and 1970.

Kalu was quoted as having said: “Thirty-four years is long enough to forget any issue we have against ourselves. Now is the time to move on and forget our ill feelings towards one another.

“The National Conference Committee on Political Restructuring is giving us another opportunity to consolidate on this. We should not fail to take advantage of the opportunity”.