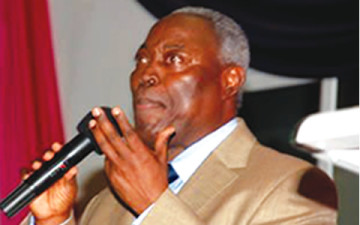 Contrary to media speculation that the General Superintendent of the Deeper Christian Life Ministry, Pastor William Kumuyi, took ill and had to be hospitalized, the church has confirmed that the cleric was prevailed upon to take a day off from preaching due to fatigue at the just concluded three day National Easter Retreat programme of the church.

Pastor Kumuyi was said to have displayed visible signs of tiredness following his many missionary journeys around Nigeria and Africa in the last few weeks.

The Church Secretary, Pastor Jerry Asemota, announced on Saturday morning through satellite broadcast that the leadership of the church had to “plead” with Kumuyi to rest for the early morning and afternoon sessions, after it was clear the work was taking its toll on him.

Kumuyi was said to have traveled to Kwara, Oyo, Imo, Taraba states and also Togo and Benin Republic in quick successions, where he preached an average of three messages daily in usually three-day-long revival programmes.

However, the effect of his travels began to show on Friday evening while taking a third message at the Kilometre 42, Lagos-Ibadan Expressway campground titled, “In the steps of the saviour”, when his voice cracked.

On Saturday morning, when the congregation expected him to mount the pulpit in ministration in another session, the church scribe instead announced that “The pastor will not be ministering during this morning Faith Clinic and afternoon Bible Teaching.

“We had to plead with him to rest because he had been moving from one state to the other and travelling to different countries, preaching”.

On Sunday morning, Kumuyi confirmed Asemota’s statement while addressing the church, adding that he would soon be going for another round of ministration in Delta State from April 25 to 27, 2014.

In his final message yesterday titled “Reigning through the victory of Jesus”, Kumuyi said Easter was a day to commemorate the resurrection of Jesus Christ, urging Christians to emulate him.

“This day commemorates the day Christ resurrected. He overcame sin, Satan and all the enemies that could come against your life. Because he overcame, you have overcome already. As you have received Christ, and the abundant grace of God, you will reign in life”, he said.

Looking refreshed, Kumuyi said the country would need to receive the virtue of Jesus Christ and run with His vision to be able to reign in His victory.