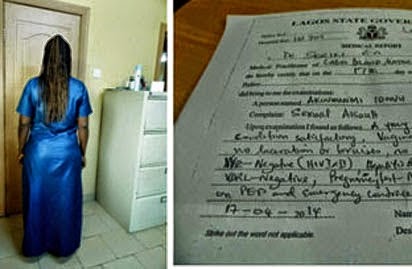 The Divisional Police Officer in charge of Onikan Station, Mr. Adekunle Awe, who was accused of having carnal knowledge of a woman, Idowu Akinwunmi, and threatening her life, has been arrested by the Lagos State Police Command.

It was also leant that two other policemen of the rank of inspector, were arrested to assist in ongoing investigations.

As a result of the public outcry the victim’s story generated, the Inspector General of Police, Mohammed Abubakar, the Lagos State Government and other human rights groups stepped into the matter with a view to ensuring justice was done.

A reliable source, who spoke with PUNCH said, “The DPO has been detained at the Special Investigation Bureau at the command headquarters. Two other inspectors, who were on duty when the alleged offence took place have also been arrested.

“The state government frowns at rape and if you recall, a new law on rape was passed not too long ago so we shall be leaving no stone unturned.

“The complainant and the accused persons as well as very senior officers of the command all had a meeting in the office of the Deputy Commissioner of Police in charge of Administration and I can tell you authoritatively that no stone will be left unturned”.

The development was confirmed by the Lagos Police Public Relations Officer, Ngozi Braide.

She said, “As you know, allegation of rape is a very grievous one and we have commenced investigation into the matter. The DPO has been relieved of his post and is in custody so as not to interfere with investigations.

“I want to assure the public that the command is not taking it lightly and will make sure that we get to the root of the matter”.

It would be recalled that Akinwunmi, who worked at an eatery on Keffi Street, Ikoyi, was arrested on the orders of her boss for accommodating a customer a male friend of hers, identified as one Friday, contrary to the rules of the restaurant. Her employers provided accommodation for the victim and other staff.

The police were also said to have arrested five others including Akinwunmi’s male companion. Two of her friends, who she pleaded with to come and bail her, were also clamped in detention.

The victim had said she was forced into having sex with the DPO, who refused to use protection, despite her entreaties, after he had threatened to kill her and allow her to rot in prison if he she did not cooperate. She also alleged that she paid N30, 000 as bail.