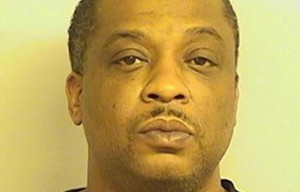 Authorities have arrested an Alabama man for allegedly pouring hot grease on his sleeping girlfriend, according to WALB News.

Anthony Dwayne McGraw’s (pictured) unidentified girlfriend told officers she woke up to the grease being poured on her face Sunday morning. She claims she saw McGraw standing over her after awaking. The attack happened at a home in the 2900 block on Ozment Road in West Tuscaloosa. McGraw had already escaped by the time law enforcement arrived.

“It appears he began cooking something while she [was] asleep on the couch and for whatever reason, decided that was going to be his weapon of choice,” commented Lt. Kip Hart, who works with the Tuscaloosa Country Metro Homicide Unit.

Fortunately, the woman is projected to survive. However, having sustained severe burns, she will require extensive treatment.

“My understanding, her injuries are quite severe as far as she’ll probably need cosmetic surgery,” Hart added. According to court documents, the couple’s children were home when the attack happened. McGraw shares a 10-year-old with his girlfriend.

According to the Tuscaloosa News, McGraw was angry that his relationship with his girlfriend was coming to an end. His problems with her stem back to last August, when she claimed he threatened her in a restraining order she filed against him. A judge dismissed the order a month later.

McGraw has a minor criminal history, with arrests for drug distribution and marijuana possession.

U.S. Marshals apprehended McGraw Monday evening near Kaulton Park. He is charged with first-degree domestic assault and is being held on $60,000 bond.