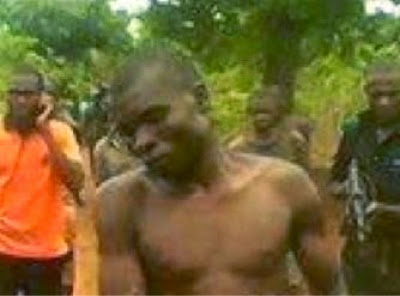 High level of wickedness, this man shouldn’t be left alone to live his life, he should be killed, his own popsy? kiaaaa….this one pass me
The Ebonyi state police command paraded the dangerous entity who was indentified as Chukwudi Nwode Awam,30. He beheaded his father, Micheal Awam,56 and consumed his neck. This horrible event took place in their village Egwudinagu Obegu in Ebonyi.
According to the Ebonyi Police PRO, Chris Anyanwu,

When the police went for him, he was waving the machete which he used to cut his father’s head and threatening to kill anybody that gets close to him. He was overpowered all the same. “He was seen eating the entire stub of the neck. So when you look at the exhibit, the head doesn’t have the neck even though he did the beheading from the base of the shoulder. You will not see the part of the body that is supposed to be the neck; he ate it up. 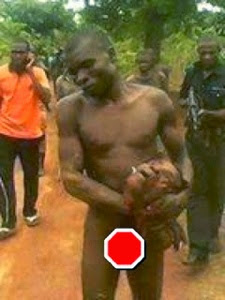