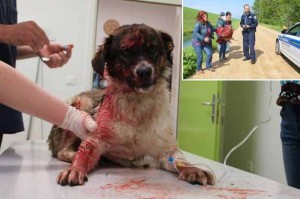 A cruel dog owner paid a ‘hitman’ to kill his pet as he was too mean to pay a vet £30 to put it down.

But the mongrel, called Olly, survived both the shotgun blast and the icy dip. Fisherman Pawel Brodzky, out angling with his son, spotted the near-dead dog in the raging Drava river.

“We pulled the poor creature from the water and took him to an animal shelter, where he was said to be in poor shape but strong enough to survive.”

Quick-thinking Brodzky also spotted the hunter further down the river putting his gun in his car near the village of Orehovec in northern Croatia, and noted down his car registration.

The huntsman is believed to have shot several dogs according to animal welfare workers and faces a year in jail on animal cruelty charges.

Olly, who needed surgery to his head and leg wounds, is expected to make a full recovery within two months.

He has been renamed Lucky and will stay in the shelter unless he is adopted.