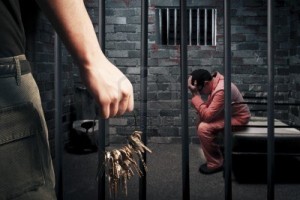 An ex-con who spent most of his adult life behind bars on Thursday got what he said he wanted for robbing a suburban Chicago bank. The 74-year-old gets to go back to the place he called home — prison.

Telling Walter Unbehaun he frightened a teller by showing her a revolver tucked in his waistband during the 2013 heist, a federal judge imposed a 3 1/2 year prison sentence, citing a rap sheet that includes crimes from home invasion to kidnapping.

As he had on the day he robbed the bank, Unbehaun gripped a cane as he hobbled to a podium to make a brief statement. He didn’t withdraw his wish to go to prison, though he said, “I don’t want to die in prison.”

“My crime is bad, there ain’t no doubt,” he said calmly. “I just wanna be like everybody else.”

Boredom and loneliness, defense filings said, had partly led Unbehaun to conclude that a life on the inside was preferable to life outside.

No family or friends of Unbehaun attended Thursday’s hearing in Chicago.

Listening to the proceedings, he fidgeted and rubbed his forearms, both of which sported tattoos. He occasionally nodded as his lawyer spoke.

Last year, he walked into the bank with a cane but no disguise, displayed the loaded gun and told the teller, “I don’t want to hurt you.” With $4,178 in loot, he drove to a nearby motel and waited for police to arrive.

When they did, the bald, portly Unbehaun dropped his cane, raised his hands and startled police by his apparent joy at getting nabbed.

At his initial court appearance, he also confounded his lawyer.

“His first words were, ‘I just want to go home,” that same attorney, Richard McLeese, told the court Thursday.

For a few minutes, McLeese had thought Unbehaun was saying he hoped to get bond. Then he realized Unbehaun was asking to go to prison. It was as if, McLeese said, a patient had asked his doctor to help him have a stroke.

“It is, without a doubt, one of the saddest and most disturbing cases I’ve dealt with,” he said.

Prosecutor Sharon Fairley conceded the judge faced a dilemma: Sending Unbehaun to prison could be seen as more reward than punishment to him, but setting him free would risk him committing another serious crime.

His case raised broader societal questions, she said in one filing.

“Did the system fail Mr. Unbehaun? Or was his inability to stay out of jail the result of his own free will?” she asked. “We may never know. But what we do know, clearly, is Mr. Unbehaun lacks the desire to lead a law-abiding life outside of prison walls.”

The Chicago-born Unbehaun first went to prison at 23 for transporting a stolen car. He was convicted of kidnapping a 19-year-old girl in 1970 whom he had tied to an Ohio motel bed before fleeing in her car. His record includes more than half a dozen convictions, including — ironically — for escaping from prison.

He pleaded guilty in September to the 2013 bank robbery. Prosecutors asked for a five-year sentence Thursday, though they’d asked for seven in earlier filings; the defense asked for three.

It wasn’t as if no one tried to extend Unbehaun a helping hand.

Following his 2011 release from prison after serving an 11-year term for bank robbery, his sister and her husband bought Unbehaun, a childless widower, a trailer home in rural Rock Hill, S.C., the couple said Wednesday. He spent his days watching television, or drawing and painting.

“He was living like a hermit,” McLeese said. “The analogy he drew was that it was like living in solitary confinement.”

McLeese told the court Thursday the onset of mild dementia may have contributed to Unbehaun’s decision to rob his way back into prison. He said the last judge who sentenced him failed to ensure his mental health treatment.

Coleman said Unbehaun would also serve three years of closely monitored probation and that mental health services should be readily available to him.

She had some kind words for Unbehaun. She praised his skill as an artist, citing drawings he’d sent her. And she sounded sympathetic when she talked about Unbehaun going into a prison environment that will be harsher for him now that he’s pushing 80.

As the hearing ended, Unbehaun requested that he be sent to FCI Greenville prison in southern Illinois, walking Judge Coleman through the various benefits of the facility, including good work programs.

Coleman agreed to recommend that prison. She then shook her head.

“It’s sad,” she said, “to have a defendant who knows the facilities and knows which ones to go to.”