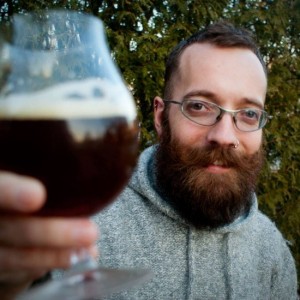 For many Christians, Lent is a time to abstain from the things they love. But for people like Chris Schryer, it’s just the opposite. He’s giving up everything else except what he loves most – beer. The 33-year-old web designer from Toronto has shunned all solid food  and has been living on beer since March 5. In fact, he believes that what he’s doing is a real test of spiritual discipline.

“Without being dramatic, it definitely is not fun,” said Chris. “It’s challenging. Every meal time there’s a challenge. I look pretty healthy now, but by the end of the 40 days my wife figures I’ll look like a castaway on account of my bushy beard.”

For the past few weeks, Chris has been having a bottle of strong beer for breakfast. At lunch, he guzzles another beer and dinner consists of a large 650 ml bottle. He also has a mid-afternoon ‘work beer’. To avoid getting dehydrated, he keeps up a steady intake of watered down juice and other clear liquids. His rules are simple: ‘No dairy, no ‘nectars’, no protein shakes or smoothies.” He takes a multivitamin and his health is constantly being monitored by his family doctor.

For Chris, beer is a passion, a hobby and a side job as well. He runs a beer-based website called TorontoBeerBlog.com, where he periodically reviews various brews. And since he started the Lenten beer fast, traffic to the website has surged. “There has been a huge upswing in traffic at my blog, and messages are coming in via Facebook, Twitter, email and comments here at a surprising rate,” he wrote. “As a big part of this journey was sharing my fast with as many people as I could, this is very good indeed.

Most of the beer that Chris consumes comes from a 100-liter batch of doppelbock prepared specially at Toronto’s Amsterdam Brewing Co. That’s a German lager, ranked among the world’s heaviest beers, containing just enough nutrients to help Chris survive. He described its flavor as ‘sweet and malty, with caramel, biscuits and a bit of oats’. Doppelbock is light on protein, totally devoid of fat, and gives him about 2,000 calories a day. Interestingly, Chris is a devout Anglican – he got Reverend Lucy Reid of Toronto’s Church of St. Aidan to bless the 100 liter stock of beer.

On Monday, Chris declared on the blog that he had ‘reached the mid-way point’ of the 40-day Lenten fast. “Funny enough, it seems to have been quite long, and also feels like I just started,” he wrote. But if he keeps this up any longer than the intended 40 days, the all-beer fast could actually be fatal. The constant hunger pangs would soon be accompanied by extreme mental fatigue, scaly skin and a chronic sensation of feeling cold. And eventually, death.

Interestingly, all-beer diets are something of a forgotten Lent tradition. Legend has it that in the early 1600s, Bavarian monks followed similar liquid diets, almost exclusively fueled by special batches of doppelbock. At one point, the monks began to fear that the beer was too rich and extravagant for Lent, so they sent a cask of the stuff to the Vatican for the Pope’s approval. By the time the cask completed the journey to Rome, the beer had gone sour and rotten, so the Pope approved it on a technicality.

In 2011, we wrote about J. Wilson, a blogger from Iowa, who had decided to revive the centuries-old tradition. He attempted to give up solid food for Lent and lived on beer alone. Wilson went on to achieve his goal, but not without causing great damage to his body. He blogged about it, wrote a book and two years later, vowed that he would never do it again. Surprisingly, Chris is quite aware of Wilson’s experiences, but he’s still willing to risk his health.

But Wilson had consumed only beer and water. Chris is doing it a bit differently: apart from the beer, his diet includes a heavily sugared tea at breakfast, three pints of watered down juice during the day, a pint of water and a dose of multivitamin at lunch, more juice in the afternoon and some heavily sugared coffee in the evening. He rounds off the diet with a hot cup of herbal tea before bed. And of course, there’s beer three to four times a day. Let’s just hope that by the end of this, his love for beer doesn’t turn into an aversion!