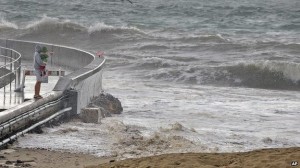 Rescuers have ended their search for a 43-year-old man swept to sea during a baptism ceremony on a Southern California beach.

The U.S. Coast Guard says the search was called off about midnight Sunday and there are no plans to resume it.

A wave pulled three people into the ocean about 10 a.m. off Rancho Guadalupe Dunes Preserve and only two managed to return to shore on their own.

Pastor Maurigro Cervantes of Jesus Christ Light of the Sky Church says his cousin, Benito Flores, was helping perform a baptism when he was swept away.

Fire Capt. David Sadecki said Monday that it would be difficult for anyone to survive more than 30 minutes in the cold water.