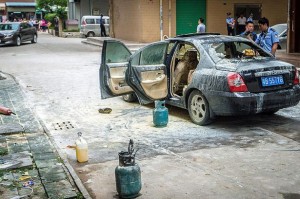 A dad-to-be who kidnapped his pregnant girlfriend before blowing her up when police arrived is now fighting for his own life after suffering severe burns in the shocking attack.

Chinese Li Moulian and his girlfriend Xu Fan found out they were expecting after a one night stand six months ago.

They decided to stay together, with Li, 36, taking on casual work to support his new family and the couple moved in together.

But despite appearing happy, Li attacked 21-year-old Xu as she slept, telling her that he knew she had killed his family.

He dragged her out of bed and into his car, before tying a gas tank to her back and saying he planned to kill her.

He then drove around the town of Mazhuang New Village, in China’s southern Guangdong Province, until police spotted them after a concerned neighbour raised the alarm.

Police spokesman Tao Hou said: “As the police car with a siren approached the car with the man and woman inside, and another blocked off its escape route from the rear, the man ignited something in the car which exploded into flames.”

Xu Fan was pulled from the vehicle by officers who desperately tried to extinguish the flames that covered her body, but both she and Li were left with severe burns.

After being taken to hospital, they ended up side-by-side in the same operating theatre as surgeons worked to save their lives.

Xu Fan is expected to make a recovery, but the condition of her unborn baby is not known and Li is not expected to survive.

Xu Fan told police there had been no signs Li was unstable in the time they had been together, but her family said they had had concerns about her getting involved with him so quickly.

Her uncle Wu Chin, 47, said: “We had warned her that she needed to know more about him before deciding to spend her life with him, it seems sadly the warnings were true as he clearly has mental problems.

“To suddenly accuse her in the middle of the night trying to kill his parents shows he is obviously severely paranoid.”