A Nigerian Union of Road Transport Workers (NURTW) official has been arrested and charged with attempted murder of his former lover. 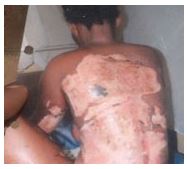 The man, 43 year-old Adesanmoye Kehinde is married with three kids but has been sneaking out with Janet for sometime and was planning to marry her but she decided to end the affair because of his trouble ways.

Janet testified today that Kehinde had threatened her life but she ignored these threats but one day at Ikotun Roundabout her deepest fears came to pass as Kehinde set her ablaze with petrol on her way to her friends house.

Kehinde had allegedly stalked her as she left her home at Olaoluwa Street in Abaranje, Ikotun.

The victim suffered severe burns and is still in critical condition.

Kehinde was arrested and charged under Sections 243 and 244 of the Criminal Code Laws of Lagos State of Nigeria 2011 and he plead not guilty.