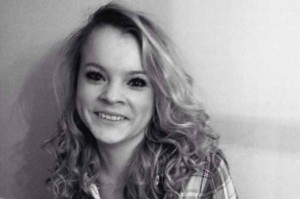 Ayllah-Beau Foley suffers from gastroparesis – a rare condition which paralyses the stomach muscles.

The 19-year-old from Cheltenham is only fed nutrients through a small tube directly to her heart.

“Having this condition has really changed my life,” she said. “I can’t sit down for meals with my family anymore, I can’t eat out with my friends – I can’t even tuck into a Sunday lunch.

“I have a twin brother, Jordan, but we can’t eat cake together on our birthday – if I tried I’d just be sick.

“It is really hard but I try and stay positive, and I just hope I can beat this horrible illness one day.”

Ayllah-Beau’s condition first developed when she returned from a volunteering project in India.

Beau said: “I was so excited to go to India with school and I couldn’t wait to get out there and get stuck in.

“But when I came back I just felt awful and started to get really ill.

“I assumed it was just food poisoning I’d picked up out there, but it just got worse and worse.”

It soon became clear that Beau needed medical attention, and her parents took her to the doctors.

Beau’s worried mum and full time carer, Christine, said: “At first we assumed that Beau just had Delhi belly – something that she’d picked up when she was out there, but she wasn’t getting any better.

“Eventually we took her to the doctors but they seemed stumped too.

“At first they thought it was something to do with her appendix, but they did an operation and couldn’t find anything.

“Then they thought it might be gynaecological but again that wasn’t the answer.”

“Medics even began to suggest that Beau’s condition could be psychological.

“We were quite annoyed that there was a suggestion that this was all in her head, when that quite clearly wasn’t the case.”

After further tests and examinations Beau was finally diagnosed with gastroparesis.

Christine said: “We were shocked to hear that her stomach muscles were paralysed – we had no idea that something like that was even possible, but it was a relief to get a diagnosis too.

“Beau had lost about three stone in weight, so it was great to think that something was finally going to be done and she could get better.

“But it soon became apparent that this wasn’t the kind of diagnosis we had wanted.”

Beau has tried various treatments since her diagnosis, including a feeding tube directly into her bowel, and a gastric pace maker, but none have cured her condition.

She now relies on a feeding tube that sends nutrients straight to her heart.

Christine said: “The tube she has now feeds nutrients into her jugular vein and transports them to her heart and the rest of the blood stream.

“She is fed for fourteen hours overnight to keep her alive.

“At the moment that is the best treatment that she can have, and we just have to hope that there is something better around the corner.”

But despite being fed essential nutrients, Beau still wishes she could eat like everybody else.

Beau said: “I still get cravings for things like chocolate, sweets and burgers.

“I might have a teeny tiny bite every now and then, just to satisfy the craving, but it’s not the same.

“It’s horrible because I used to love different foods so much, and now I can’t have any of them.

“I’m exhausted all the time, so I have to see what my friends get up to from Facebook.

“My twin brother, Jordan, is a soldier and sometimes it can be difficult seeing him so active when I’m cooped up in bed all the time – but of course I’m so proud of him.

“I’ve come to accept my condition now and I take each day as it comes.

“I hope that one day, I’ll be back to my normal self, but for now I try to stay as positive as I can.”