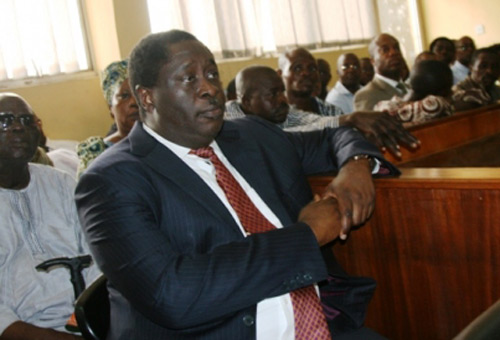 An Ikeja High Court on Wednesday adjourned hearing in an application filed by the Chairman of Bi-Courtney Services Ltd., Wale Babalakin, till May 12.

Babalakin, in the application filed before Justice Lateef Lawal-Akapo, had asked the court to dismiss the N4.7 billion fraud charge preferred against him and four others.

The News Agency of Nigeria (NAN) reports that the court had earlier fixed Wednesday, April 30 for hearing of the application but could not sit due to Lawal-Akapo’s absence.

The judge was said to be attending a workshop on Continuous Legal Education organised by the Ikeja branch of the Nigerian Bar Association (NBA).

NAN gathered that the new date has been communicated to the parties involved in the suit.

They are facing a 27-count charge bordering on conspiracy to commit felony, corruptly conferring benefit on account of public action and retention of proceeds of a criminal conduct.

His co-defendants had also filed similar applications, challenging the court’s jurisdiction to entertain the charge.

They had also challenged the competency of the charge, arguing that the EFCC lacked the power to prosecute them before a state high court without a valid fiat. (NAN)