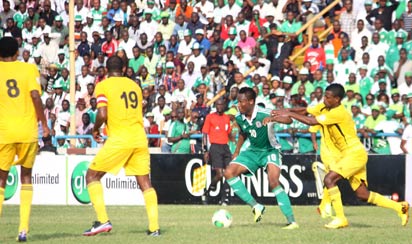 The Ethiopean Antelopes lost to the Super Eagles during the their qualifying play-off 2-1 in Ethiopia and 0-2 in the return leg.

Bishaw however strongly believes that FIFA favoured the recent African Champions and didn’t want a small team like Ethiopia to be in Brazil.

Bishaw, who was relinquished of his duties with the Ethiopian national team said: “FIFA didn’t want us (Ethiopia) to qualify (for the World Cup) because who knows Ethiopian football and who wants us to qualify when we were playing against the current African Champions,” the coach told Football411 in an interview.

“It was a shame for Ethiopian football because we fought from the (first) blast of the whistle to the end. For me, Nigeria didn’t deserve to qualify because they were aided by FIFA, which is not good for the game of football.”

The 62 year old Bishaw had earlier in 2005 coached the Ethiopian national team to success in the CECAFA Cup.And in 2011 he was reappointed for his second spell after the resignation of Belgian coach Tom saintfiet.

Share
Facebook
Twitter
WhatsApp
Previous articleDammy Krane Reveals Why He Would Never Get A Tattoo
Next articleCUTE PHOTO: Popular Nigerian Pastor Takes Selfie With His Wife
- Advertisement -Ad ==> Discover how a young Nigerian graduate now makes a consistent 40k per week doing a legitimate online business. You too can start yours now, click here!!!